This currently affects most Macs as well as ALL iOS devices (all iphones, ipads, ipods) that are not on the very latest patch that apple just put out February 21st. (iOS 7.0.6)

As of today, February 22nd, Apple is still working on a patch for their macs.... we believe the lack of a patch for Mac OSX to be the reason that Apple did not immediately come out and announce their issue publicly.

In layman's terms, the vulnerability makes HTTPS/SSL traffic unsecure. If you connect to a wifi hotspot, hackers with access to that wireless network segment can perform a man in the middle attack, allowing them to see/spoof/inject all of your "secure" internet traffic. This includes all credit card info, personal info, everything you are browsing, etc. They would also be able to "pretend" to be a normally secure site such as your email provider or bank to obtain further information from you. 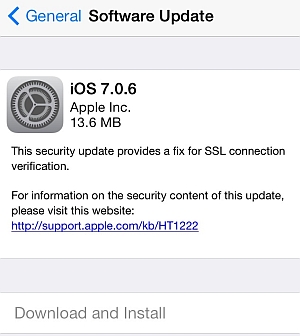 iOS users should update their devices asap. We recommend using iTunes to upgrade rather than the "Over The Air/OTA" updates that you see under the "Settings" menu. It updates in a much cleaner fashion when using iTunes.  Mac OSX users should be on the lookout for the security patch and apply it as soon as able.

Users of any Apple device should avoid public Wifi usage until their devices are patched."