5 ways a VDI, Virtualized Desktop Infrastructure, can improve IT for both users and admins 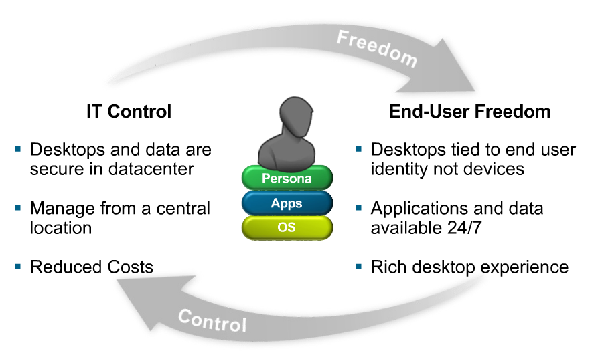 The benefits of virtualizing your desktop environment are numerous, in today’s world business’s IT departments are growing by leaps and bounds and the work needed to add, integrate, and maintain can push IT resources to the limits. Virtualization was traditionally used to help reduce the number of servers needed to run the IT, but as the software became more advanced, the usefulness of having a Virtualized Desktop infrastructure (VDI) has become more apparent.

What is a VDI? Well for the user the goal is to make it seem like nothing is different. A good analogy to this is when you call someone at their office to speak with them. To the caller they assume that the person is at their desk taking your call, but they could have easily forwarded the call to their home, giving the allusion that you are talking to them at their office, but it gives them the flexibility to work from anywhere. The same applies to a VDI environment, the user will think and feel like the desktop is running from their computer when in fact it is being hosted on a server within the company and is being displayed by the computer. What this really does is decouple the OS and its software from its dedicated hardware giving IT and users many advantages. 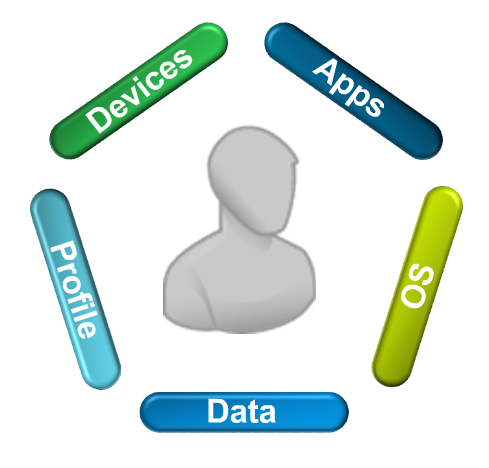 Simplified Desktop Management – For a company with many desktops, having them all updated and patched can be a troublesome process. Each version of Windows has a service pack or 3 released for it at this point and making sure that each desktop is up-to-date was a nightmare. IT had to check each machine, perform the necessary patches and move to the next machine. This would be fine except Microsoft releases patches every Tuesday and to think that all the employees are updating their desktops is a stretch. Having a VDI environment allows IT managers to update 1 version and apply it to all the desktops which is located on the server itself. Now IT can do it with a couple of clicks versus having to track down each PC.

Easy upgrades – Before if your desktop died you had to have IT retrieve all the important files and then start off new again, this made having an unexpected failure a hard and laborious event. But being all the information is stored on the company server, the users desktop can be restarted on any computer regardless of hardware, ensuring a quick recovery. Even if the desktop doesn’t die, having a virtualized desktop allows the user to upgrade more often for less money. Instead of replacing each desktop every 3 years, IT can now add more servers giving everyone the benefit of faster speeds while only adding a few more machines instead of replacing all of them.

Access to your computer anywhere – The benefit of having an email service like Gmail is the fact that you can access your email from anywhere, regardless of location. Having a virtualized desktop works the same way, instead of being tied down to one location you can access your computer from anywhere giving you access to your files and programs even if you’re not at your regular computer.

Energy Savings – The average desktop can use anywhere from 150 to 300 watts of energy through the day. A common theme of having a VDI is using a thin or zero client, these are very small computers with a limited amount of power, but because all the hard work is being done by the server, there is no need for a desktop to have a lot of power. This allows them to use very little energy, about 8-13 watts of power. By using 1/10 of the power the energy saving becomes enormous to a medium sized company that might have 50 computers running throughout the day.

Lower TCO – VMware conducted a study that showed that maintaining and supporting the hardware purchased cost 3 times more than the actual hardware itself. With such a high TCO it is more effective to lower the maintenance costs than to focus on buying cheaper equipment. Virtualization of either servers or desktops allows IT to manage more machines more effectively, which lowers the hardware’s Total Cost of Ownership.