Benefits of vMotion, how VMware can minimize your IT downtime 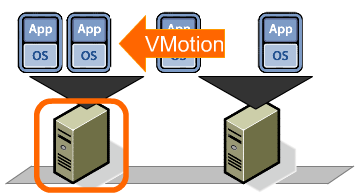 vMotion allows you to move virtual servers and desktops from one physical server to another without having to shut down the virtual desktop or server. All of this is done in real time without the user of the virtual machine even knowing they have been moved. vMotion is the first step among many VMware software solutions that are incorporated to make sure that downtime is kept to a minimum, which include Fault Tolerance, High Availability, and Digital Resource Scheduler.  The benefits of a vMotion setup are:

By having all your server and/or desktops virtualized you can move VM’s from one physical host to another, which is done rapidly over a high speed network connection, the original host and destination host stay in sync until the transfer it complete leaving the user unaware of the move. This allows network administrators to easily select resource pools to assign to the different VMs.

If there looks like a server is about to fail or is reaching its capacity, administrators can manually move VMs to another physical host, this allows your data center to be more dynamic in nature. Instead of having to upgrade hardware, you can move VM to another host to allow each VM to be more flexible in nature. If 2 VM's are putting a physical host to capacity then you could move one to another server that isn't being used as much.

90% of downtime is scheduled, before vMotion administrators had to do server maintenance late at night in order to avoid disrupting users. Having all the servers as virtual machines, you only have to move the VM to another physical host, creating zero downtime for the users and allowing administrators to perform maintenance at any time. With DRS (Digital Resource Manager), all you have to do is put a server in maintanence mode and vMotion will automatically move all VM's to another server. While technically its own separate feature, it works similar to vMotion, except it deals completely with data. As a VM starts to reach its data capacity, the LUN can easily be moved to a larger storage center. This is done without disruption to the users or having to manually reassigning more space to the VM.