What is Virtualization, IT Support expert gives non-tech explanation

What is Virtualization? Our Senior IT Support Engineers offer a non-technical explanation, because almost every business can leverage the benefits of virtualization.

The short answer is, it's pooling a few resources to accomplish the same tasks you once did with many. To put it a different way think of a company with 6 servers, each in charge of a different task like email, storage, etc. Now instead of these servers being computers think of them as people, each person has a different job, one does marketing, one is in charge of mail, another might be the receptionist, either way; each individual has a task and does only that task. While it might be beneficial to have each person doing there own task, the allocation of work is going to be skewed. If for some reason hundreds of phone calls come in today and only the receptionist can answer the phone (their dedicated task), the receptionist is overworked. Meanwhile, the mail room person has a small amount of mail to sort, so they sit idle.

This is essentially how a company with a few servers works, each with their own set of tasks; none of which intersect. But the problem is, how do we fix the fact that the phone receptionist is doing too much work? Well, you could hire another person to help with the workload, but this is going to increase cost and if this spike in activity is only an once in a while thing then it wouldn't make much sense to keep a second person on hand at all times. The other problem is what about the employee that is underutilized? They still have a lot of potential tasks they could do, but are waiting for the instructions. This is the problem most companies faced before virtualization; how can we lower the workload of one server and increase the work load of another?

Virtualization fixed this issue by taking all the servers computer power and created what is known as an Hypervisor to help distribute the tasks, evenly. Think of this as having a project manager distribute tasks to each of his employees as equal as possible. If the manger sees one department being overworked, they have someone from a different department step in and help with the workload. I know what your thinking. "Well, of course! Any good business would be structured like this!  You're right.  And the brilliant software engineers who designed Virtualization agree with you, too.  They successfully took this proven effecient business practice, and wrote software so technology could follow suit:  Virtualization.

What the Hypervisor does, is figure out the processing power of the combined servers and allocate each task a portion of this total computing power, just as project manager might allocate a percentage of the employee's total work hours that day. By doing this, the Hypervisor can change how much computer power each task gets instead of how many servers, just like a project manager can delegate how many hours of work will go to a certain task vs. how many people.

When you start your computer you probably open Outlook, word and maybe an Internet Browser, all from the same computer. It wouldn't make sense to have three different computers running three different applications when one has the power to run all three. This is what the operating system is for, to let each task run next to each other. Well, a Virtualized Network is the same thing. 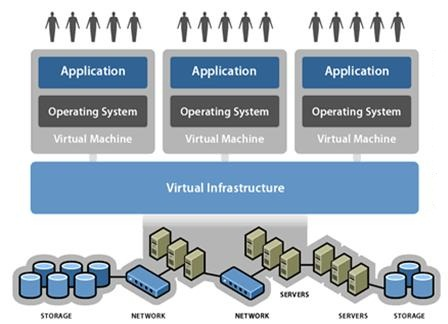 This is a basic conceptional way to think about Virtualization.  The practical way is:

Disaster Recovery is built in.

You can virtualize one server.

It is beneficial to almost any IT environment.

Your competition is probaby using virtualization.

NSI's Network Support Team is available to answer any inquiries you may have.  Call 203-723-4431 to learn more.